Another example that you might see while multiplying binomials is M minus three times 3M minus four. In this case, instead of separating them into distributive properties, we're going to use what's called the foil method. If you like this method, use it if you don't, then separate and do your distributive property twice. So with the full method, I'm looking at. The first number. And each. I'll parentheses. What is the first number in each parentheses? So that means that when I look inside this first setup parentheses, my M is first. So I'm going to multiply my M times the 3M, which is the first number in those parentheses. So this stands, this means F my O stands for. Outside. Number. So when I look at, if I put these in boxes, and I say, okay, this is desk number one, desk number two, desk, number three, and desk number four. Which one of these four deaths are located on the outside? Two desks are located on the inside, two are located here on the outside. So that'll be M times negative four. Or am I outside numbers? So you have M times stroke circle negative, negative four. I stands for inside. Number. Which of these four deaths, again, are located on the inside that will be negative three times 3M negative three times three and M and then the L stands for last. Number in each parentheses. So if I look inside of this first set of parentheses, negative three is my last number. If I look inside this set of parentheses, negative four. Is my last number. So you give these answers and then add them all up together. So first we have M times 3M I put an X so I should have been in. So there's an imaginary one in front of the M so three times one is three. So I can erase the three and the one. Now remember we have M there's two M's when we multiply the number two, goes up in the air because we're multiplying. For the outside number, we have M times negative four. What is just equal to negative four M? Next we have our inside number, which is negative three times 3M so we have a negative three times three, which gives us a negative 9 M remember if this was addition, we would not be able to add because we can not combine unlike terms. Because we're multiplying, we can multiply unlike terms. So negative three times three gives us the negative 9, and we only have one M so you put the M here. For our last number, we have negative three times negative four. Remember that worse when you multiply. And when we divide only, it does not work when we're adding or subtracting. So if I'm a plus sign here, two minus signs here, I'm going to scratch out my negative because I see a negative in front of the force scratch off a negative because I see one in front of three. That means negative four times negative three gives me a positive. 12. And these are actually our answers. All we have to do is write them. Side by side. So the answer for multiplying. We have three M squared, I'm going to write that. Or we have 3M squared. And then put a plus sign, negative four M, put a plus sign, negative 9 M plus 12. So now you notice that we have a number and a variable number in a variable. These are like terms. Your two middle numbers are always going to be like terms that you're going to add together. This means I owe you $4. This means I owe you another $9. So I owe you 9, ten, 11, 12, $13 altogether. So the answer is three, M squared. We don't have to put a plus and a minus. You choose the sign that's closest to the number. So just put minus 13 M because when we're adding, you leave the variable the same. Now I tell them to have 13 plus 12. So this is the same thing. This is your answer. Which is equal to M minus three. Times 3M minus four. This is our answer. 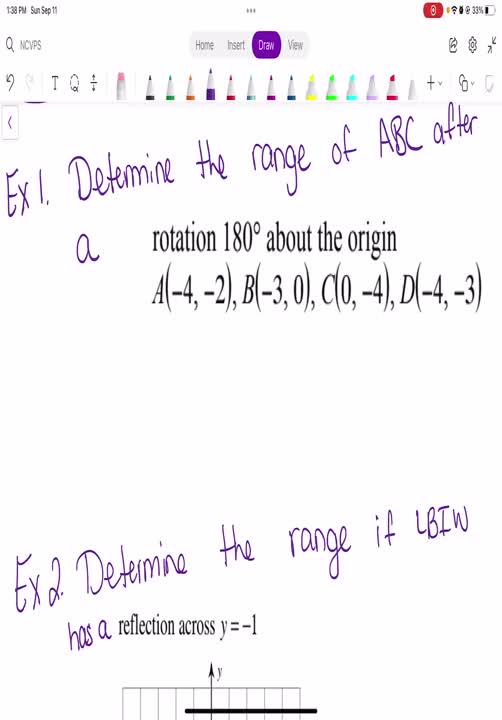 Domain of a Transformation